1. Plant a garden or add some green to your space.

2. Take a walk (while social distancing) and discover native plants.

5. Watch a documentary about the Earth.

6. Rethink food scraps.  Approximately 30 to 40 percent of the U.S. food supply becomes waste, according to the USDA.

7. Look for stars. If clear skies permit, get outside and look up. There’s never been a better time to learn how to stargaze.

8. Take a virtual field trip. Take a tour of a national park, explore the Great Barrier Reef, or even stroll through a botanic garden.

10. Let your voice be heard. Check out some of the excellent youth climate activist organizations out there like Sunrise Movement, Zero Hour, Extinction Rebellion Youth, and Fridays for Future.

11. Buy Reusable bags.  Americans use approximately 100 billion plastic bags a year.  The production of bags require 12 million barrels of oil, and eventually take ups space in landfills that cause problems for wildlife.

12. Use refillable water bottles.  Production of bottles use 1.5 million barrels of oil and over two million tons of bottles end up in U.S. landfills.

13. Buy produce for local farmer's market.  The produce in grocery stores travel an average of 1,500 to your store. Transportation increases fossil fuel consumption and carbon emissions.

14. Buy environmentally friendly clothes by upcycling.  buying something that’s already been used is great for the Earth because it doesn’t involve new resources.

Earth Day is a reminder that our planet is beautiful and amazing!  Take some time to enjoy it. 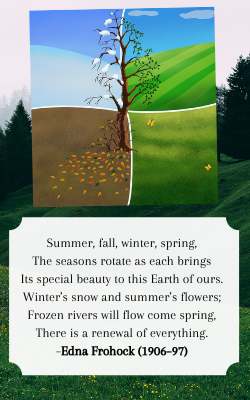 When is Earth Day?

The date was chosen because Abor Day (individuals and groups are encouraged to plant trees) is traditionally celebrated on the last Friday in April. The original organizer Denis Hayes, choose April 22, a weekday falling between Spring Break and Final Exams, to maximize the greatest student participation.

Senator Gaylord Nelson, the junior senator from Wisconsin, had long been concerned about the deteriorating environment in the United States.  Then in January 1969, he and many others witnessed the ravages of a massive oil spill in Santa Barbara, California.  Inspired by the student anti-war movement, Senator Nelson wanted to infuse the energy of student anti-war protests with an emerging public consciousness about air and water pollution. Senator Nelson announced the idea for a teach-in on college campuses to the national media, and persuaded Pete McCloskey, a conservation-minded Republican Congressman, to serve as his co-chair.  They recruited Denis Hayes, a young activist, to organize the campus teach-ins and they choose April 22, a weekday falling between Spring Break and Final Exams, to maximize the greatest student participation.

Hayes built a national staff of 85 to promote events across the land and the effort soon broadened to include a wide range of organizations, faith groups, and others.  They changed the name to Earth Day, which immediately sparked national media attention, and caught on across the country.

Groups that had been fighting individually against oil spills, polluting factories and power plants, raw sewage, toxic dumps, pesticides, freeways, the loss of wilderness and the extinction of wildlife united on Earth Day around these shared common values. Earth Day 1970 achieved a rare political alignment, enlisting support from Republicans and Democrats, rich and poor, urban dwellers and farmers, business and labor leaders. By the end of 1970, the first Earth Day led to the creation of the United States Environmental Protection Agency and the passage of other first of their kind environmental laws, including the National Environmental Education Act,  the Occupational Safety and Health Act, and the Clean Air Act.  Two years later Congress passed the Clean Water Act.  A year after that, Congress passed the Endangered Species Act and soon after the Federal Insecticide, Fungicide, and Rodenticide Act. These laws have protected millions of men, women and children from disease and death and have protected hundreds of species from extinction.

In 1990s, Earth Day went global, mobilizing 200 million people in 141 countries and lifting environmental issues onto the world stage.  President Bill Clinton awarded Senator Nelson the Presidential Medal of Freedom — the highest honor given to civilians in the United States — for his role as Earth Day founder.