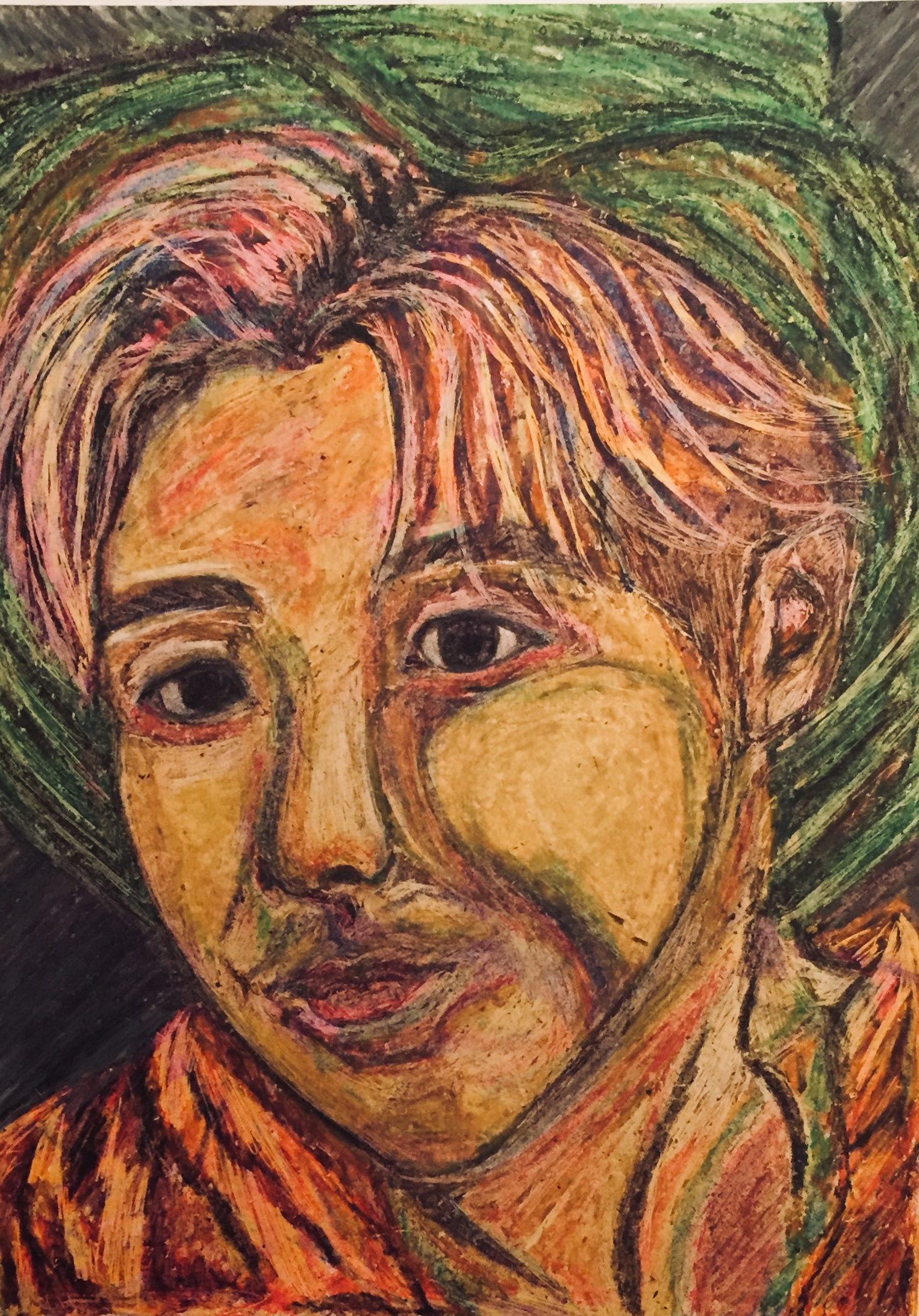 Batten Down by Cynthia Hibbler

My brother is here from California.
He needs to know where his sister is buried.
A slender man in the sales department of the cemetery gave us a map
With lines, shapes and numbers.
He said “Look for a large boulder then turn left”
Her grave does not have a marker.
A tombstone would be like a beacon
Summoning the family to come with good and not so good memories.
Others will briefly read her name and wonder what was she like?
God shared her with us; Happiness is all that we have left.
It would acknowledge her birth and death dates on this beautiful planet.
Her younger brother bought pink and white grocery store carnations
To place on a grave that we could not find.
Walking close to a soft new grave,
I flush with reminisces of her.
Lifting my eyes,
I observe another cemetery visitor
Wandering, lost like us,
Looking for her loved one in the
Endless unmarked brown dry grasses.
Feeling her stress coupled with my own,
We waved to each other.
She held a lovely bouquet of white flowers,
I held a batten made of oak wood to
Hold back the falling light blue flower petals. 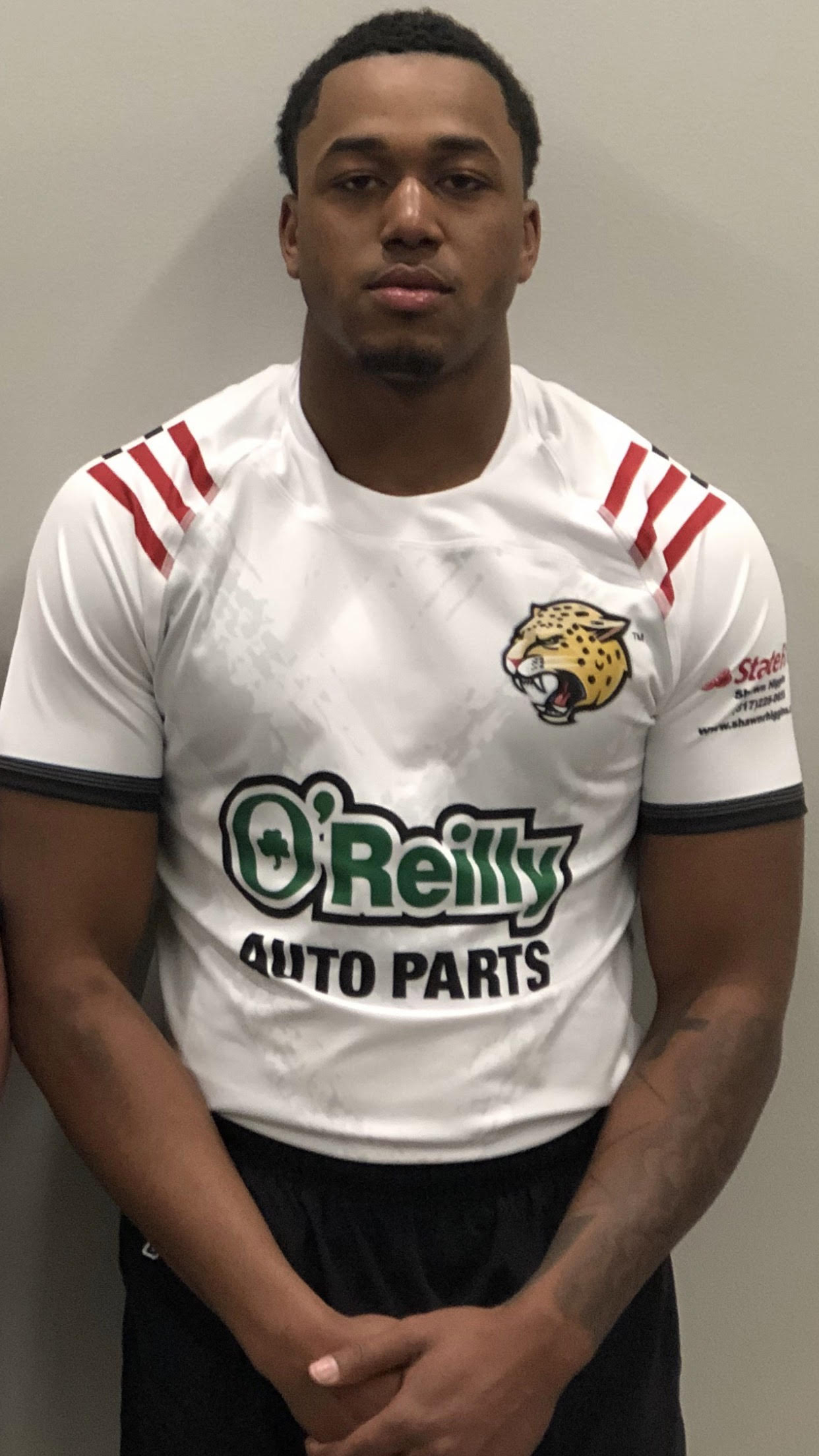 My name is Nigel Evans, I’m originally from Pensacola Fl, born and raised. I came to Indianapolis last summer to be apart of the IUPUI rugby team. I enjoyed taking Fiction writing this past semester. It helped me become more comfortable with writing and just allowing my thoughts to guides my hands when writing or typing out a short story. It’s a blessing to have been selected as the first place winner, thank you for allowing this moment to happen. 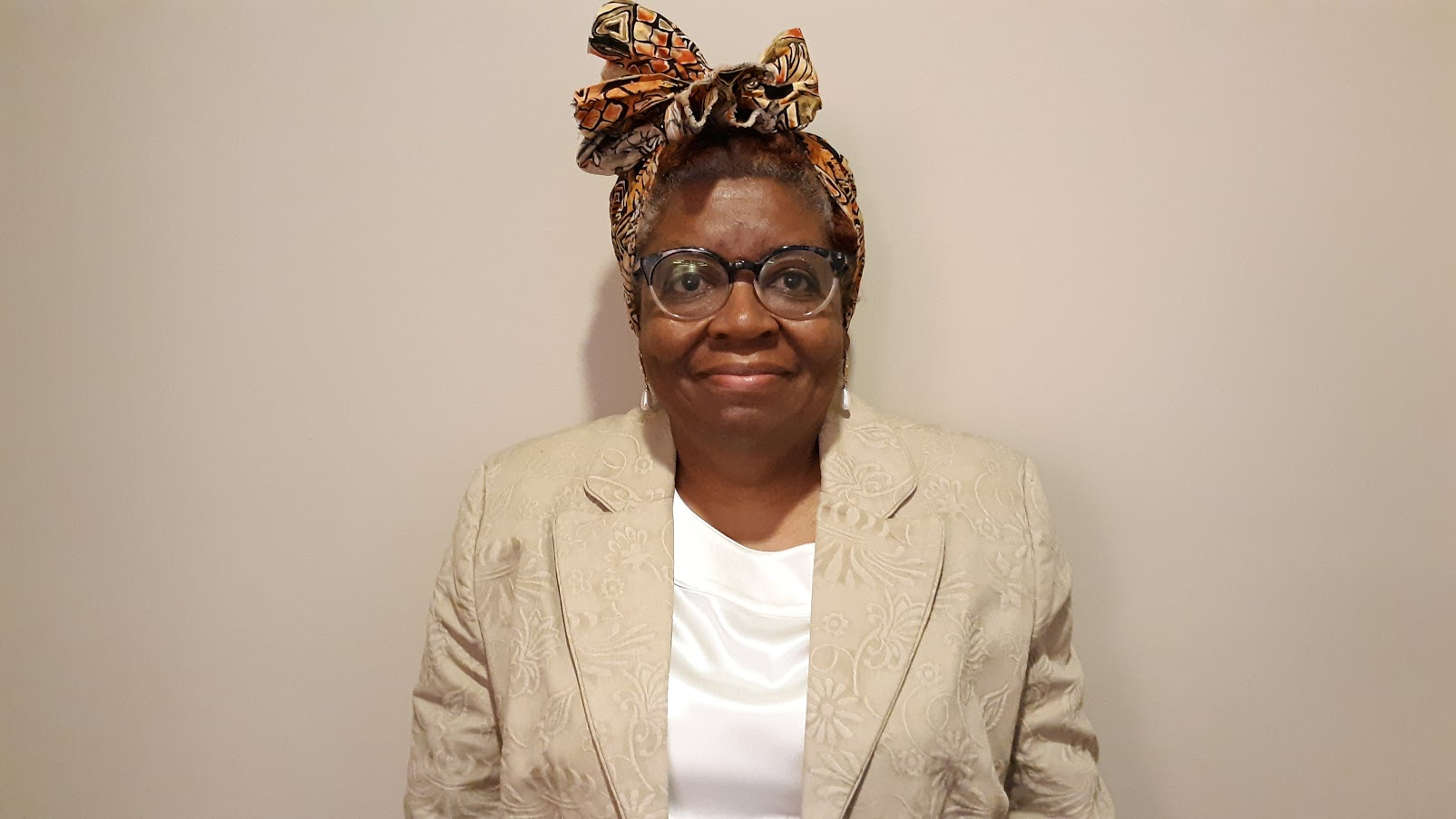 Cynthia Hibbler is a retired state worker with two adult daughters and a kind husband. She is the proud owner of an Ivy Tech Culinary Certificate and a happy member of the Blank Page writing club. She dedicates her poems to her sister Janice and her Cali brother James. 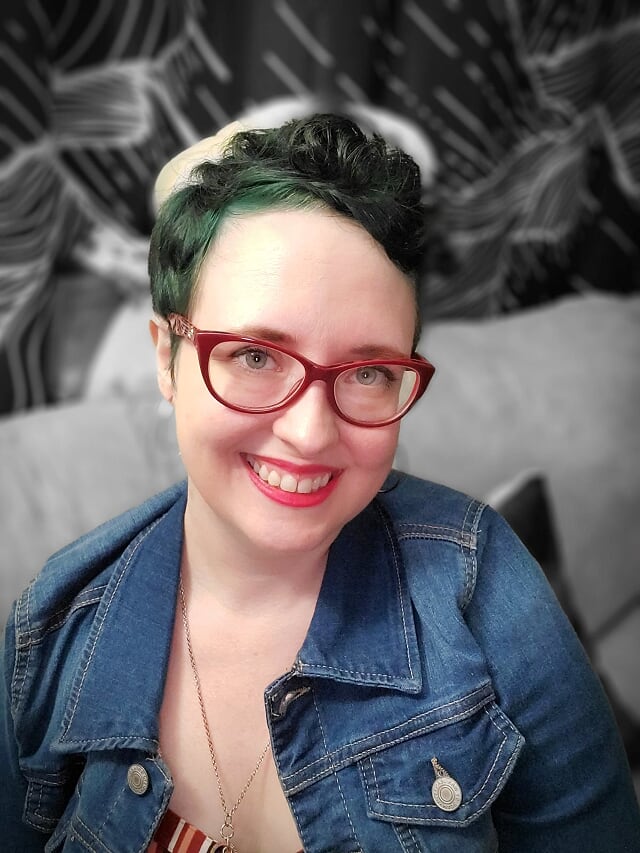 Victoria Morrow began writing creatively in grade school. Her desire to write was rekindled as an adult at Ivy Tech and she is currently working on finishing her Gens before pursuing a BA in English at IUPUI starting Fall 2021. This is her second year working as an editor for New Voices. Her favorite part of the process is when she has the opportunity to review other student’s creative works. Her love of all things nerd span the gamut, and one of her happy places is the annual gaming convention, Gen Con. She is gratefully married to her Player 2. Their “kids” consist of two cats and a snake. 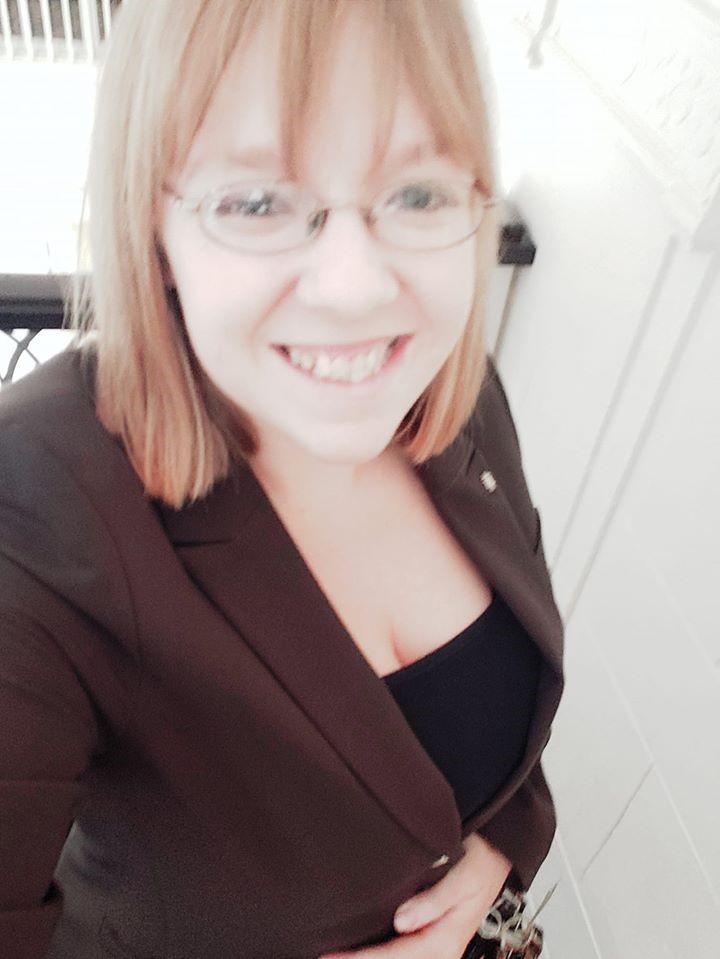 Candice Slovinski is a 30-year-old mom of 1, coffee dependent, fandom fanatic, who married her Highschool sweetheart 9 years ago. While she may be late to the game when searching for her Endgame Career in life, Literature always knew she would need it. She has always had a passion for the works of Shakespeare, Poe, Glaspell, and Rowling. Candice is transferring to IUSB this Fall to obtain her BA in Secondary Education as an English Major. Whether it be through her own words or that of another, she knows that a pen in hand is a powerful tool, when used to reach the minds of those in need. 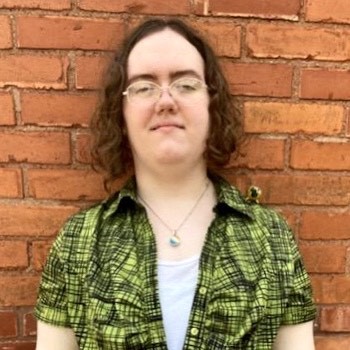 Leslie is an artist with autism who has a lot of creative potential. They love to watch cartoons and draw inspiration from them. They have hopes in becoming a cartoonist/animator to express the stories they want to tell to others and to inspire future artists to do the same. 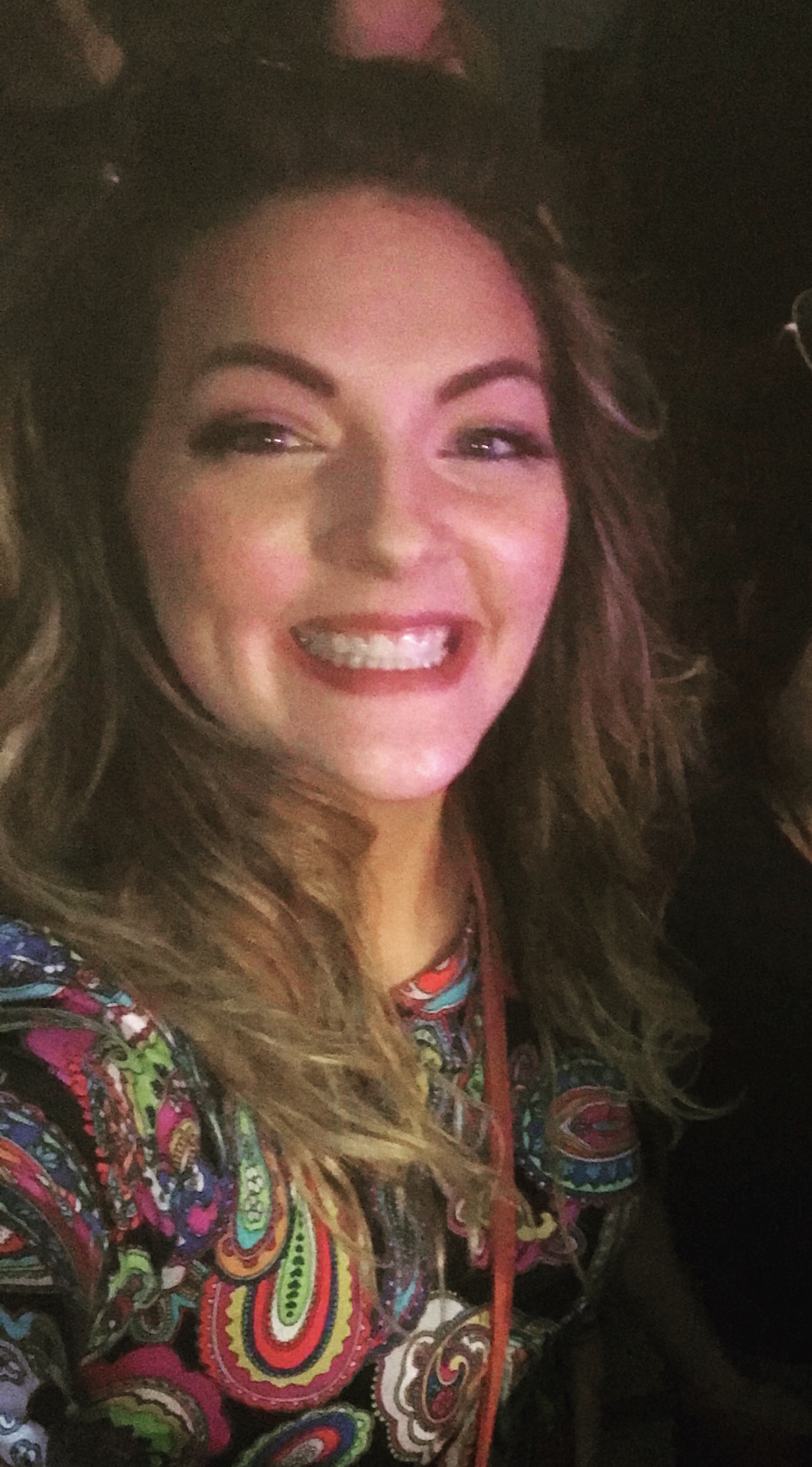 Stephanie is a highly energetic, possibly chaotic, single mom who likes to burn the candle at both ends. She’s a dedicated friend, mother, and daughter. Maintaining close relationships with those she cares about is her top priority and cackling with close friends, her favorite pastime. She hopes to be finishing up a Human Services degree in 2021. She just recently discovered the magic of writing and hasn’t been the same since. 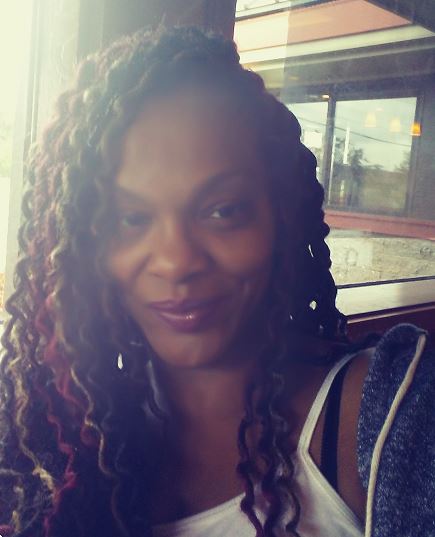 Her name is Lakisha Fox, a thirty-nine-year-old wife, and mother of four. Lakisha is known by her friends and family as loving, caring, protective, and full of energy. Lakisha is not just a wife and mother, she is also a second-year student at Ivy Tech Community college. She is expected to graduate with her Associate of Science in Human Services in Spring 2020. Lakisha enjoys singing with her church praise team, as well as a background singer for her sister. Lakisha also loves to dance and shares her passion for dance with the youth praise dance team at her church. Lakisha has enjoyed writing songs since the age of 15  using her life experiences as a tool to create neo-soul, as well as worship songs. After watching a documentary on HBO featuring Poetry slam, Lakisha could see herself as a poet. She thought to herself, with my life experiences, and my Spirit, I can be “Great”! 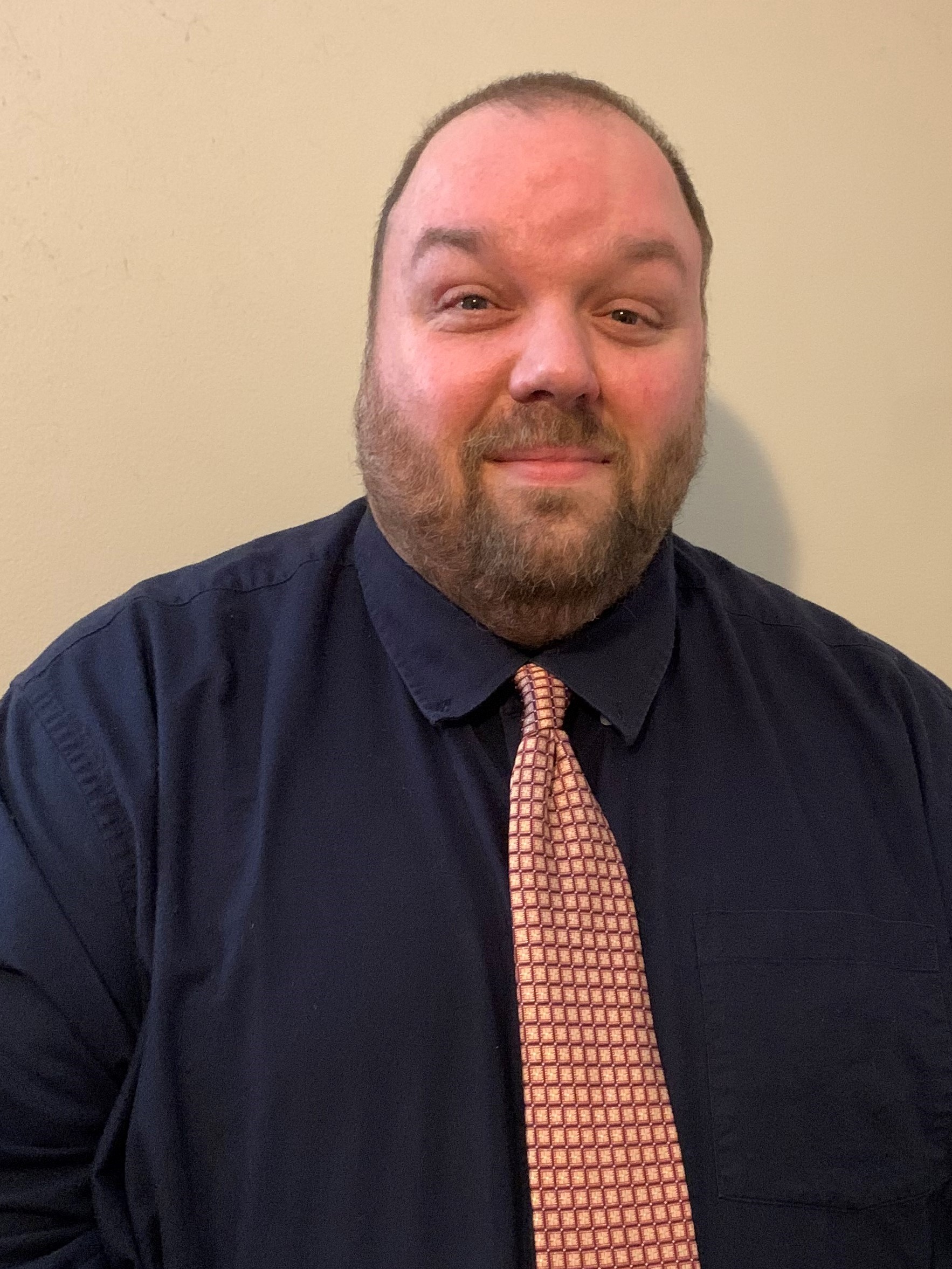 A lifelong Indy native, Matthew Bylsma currently resides on the Southside with his wife Bailey.

A voracious reader of satire, fantasy, and especially any combination of the two, Matthew has found particular inspiration in the works of Terry Pratchett and P.G. Wodehouse.

Matthew hopes that one day his own writing will begin to approach the same levels of intelligence, charm, and incisive wit that his favorite authors have achieved. 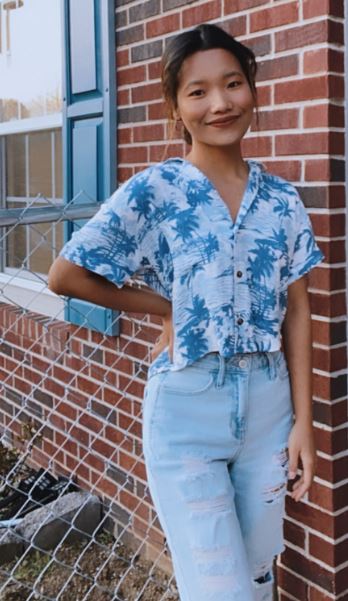 My name is Sui Par and I came from Malaysia as refugee. I was born and raised in Burma. Currently, I am attending to Ivy Tech Community College as my last semester with majoring with elementary. In 2021, I plan to transfer to IUPUI to continue my education. I lived with my family and I have two brothers. I am the oldest child in my family. One thing that motivate me to continue my education is “TO ACHIEVE MY DREAM JOB AND HELP MY FAMILY”. I love spend time with my friends and family. During my free time, what I would do is painting art and drawing. 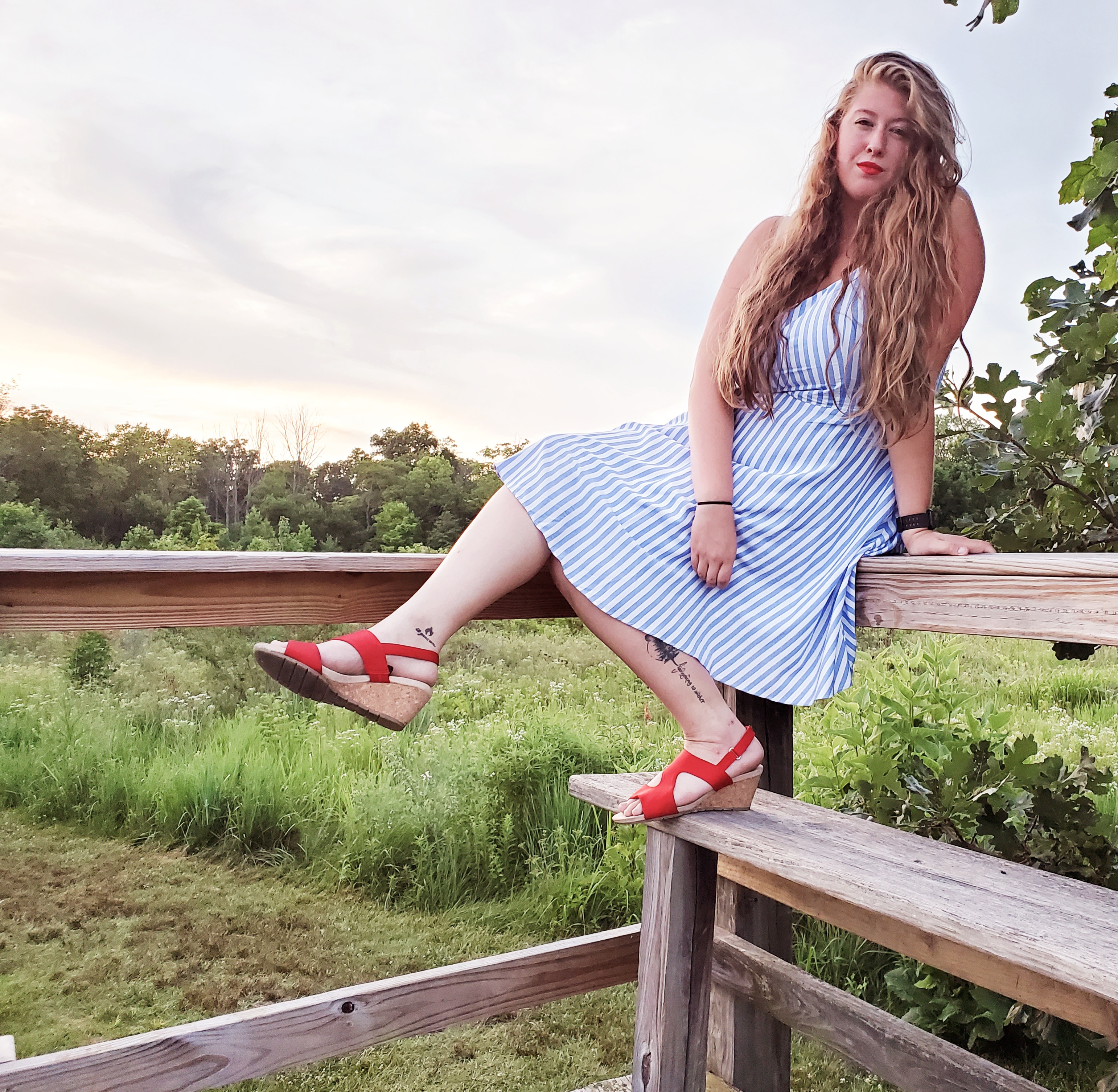 Vanessa Johnson is a social worker for the Marion County Public Health Department. She lives with her two cats and enjoys hiking and playing piano in addition to writing poetry. She is grateful to her friends for supporting her ambition and inspiring her to keep writing and chasing her dreams. 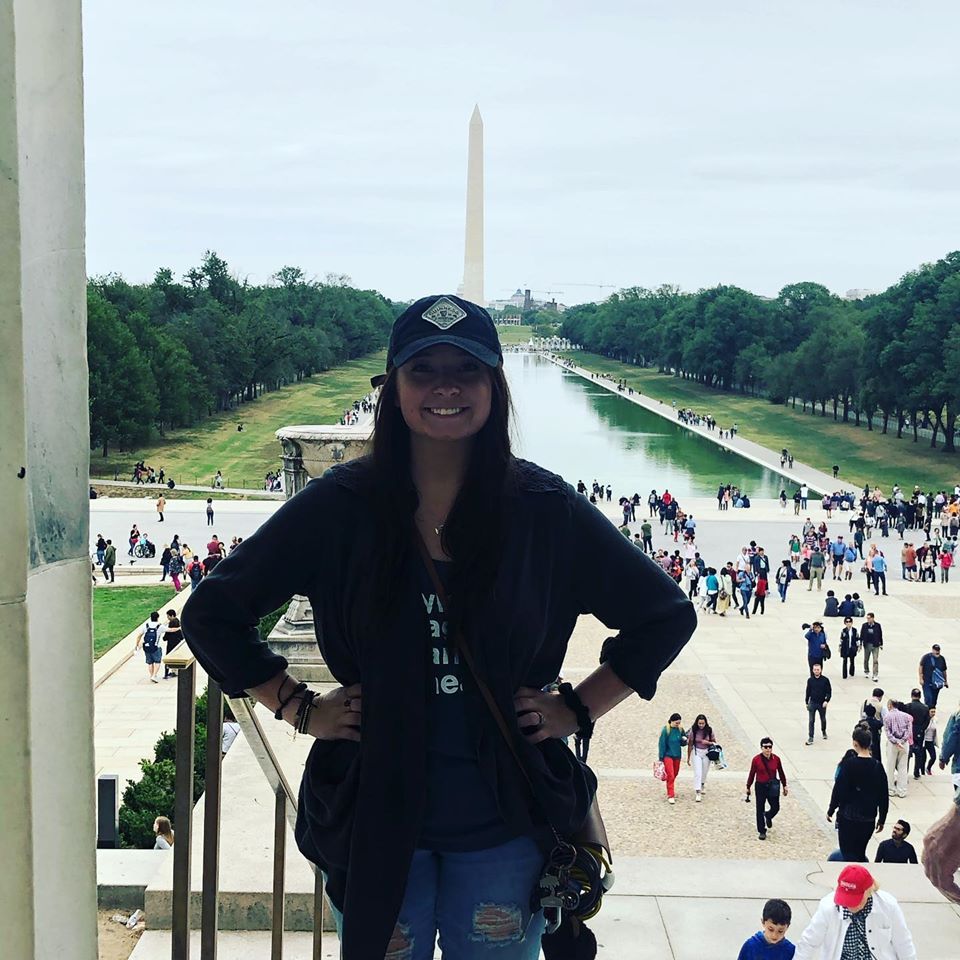 Kendra Clay is currently pursuing an English and Creative Writing degree from IUPUI. She discovered her love of reading while trying to avoid people and activities as a child and her love of writing while attending Ivy Tech Community College. Her dream since she was a little girl has been to work for Lorne Michaels as a comedic writer for Saturday Night Live and follow in the footsteps of her heroes Tina Fey and Steve Martin but until then, she and her husband plan on moving to the ‘burbs to grow tomatoes, pursue their educational goals, and read all of the books.

The Definition of Insanity by Matthew Bylsma

…He hit the deck with a thud, got up, and looked around. There was a long line of people starting just ahead of where he had landed, he couldn’t see where the line ended.

“Looks like there really is no escape,” said the person standing in front of him.

“What is this place?”, Samuel wondered aloud.

A voice further ahead said, “It’s like an ouroboros!”

He couldn’t help but agree, as the deck stretched out in front of him endlessly, twisting up over his head to come back around behind him.

“It’s more like purgatory! You’ll see that soon enough!” said another voice ahead of him.

He could see no guards, no tormentors, no one on the deck at all apart from the endless line. There was just a mast reaching up to meet the mast hanging down from the deck above. It was curiously familiar, that sail. He stared along the height of it and his eyes twisted as the riggings went from up to down halfway along, where the crow’s nest should have been. As he stared up at it and tried to make sense of what he was seeing, he noticed that a man had decided to jump over the side from the deck above. He heard a scream and a thud as the man hit the deck behind him, got up, and looked around.

“Looks like there really is no escape,” Samuel said, as he shuffled forward, following the line.

Ready to submit YOUR work?

New Voices is currently accepting submissions!  We look forward to reading your submissions for the 2020-2021 edition .

The Conscious of Addiction by Jeremy McClure

Am I addicted?
When my thought process gets crisscrossed with false visions.
I crawl to my fixes like the slither of a snake.
My nails dig up dirt like a rake as I shiver in place.
My cold sweats contradict each other.
Perspiration, taking the state of a solid, I'm balled up in covers.
This description offers a true depiction of my disposition.
Like a circle, no beginning.
Continually refilling my stash, am I past the point of intervention?
Initially gained the attention of the wrong crowd.
Impractical practices captured me.
My worries, calmed down gradually as I fall into a happy sleep.
This naturalistic fallacy has become an untreatable allergy
Now, the money spent becomes dust in the wind.
Aint have much, but enough to pretend.
And though my intentions were pure, I could not defend the allure.
So, am I addicted?
Such a predicament would suggest so,
But surely my actions aren’t nearly as cut throat as the busload of bodies abusing corrupt substances.
Maybe I’m just rationalizing but, how much is enough of it?
Still fully functioning, my habits play no factor in inhibiting my actions.
Yet, I am physically attracted to the mental facet of my practice
So, if practice makes perfect, I guess I’m perfectly trapped then.
It seems this thought has become consistent.
And, since I won’t admit it, the questions contradicting
But, am I addicted? 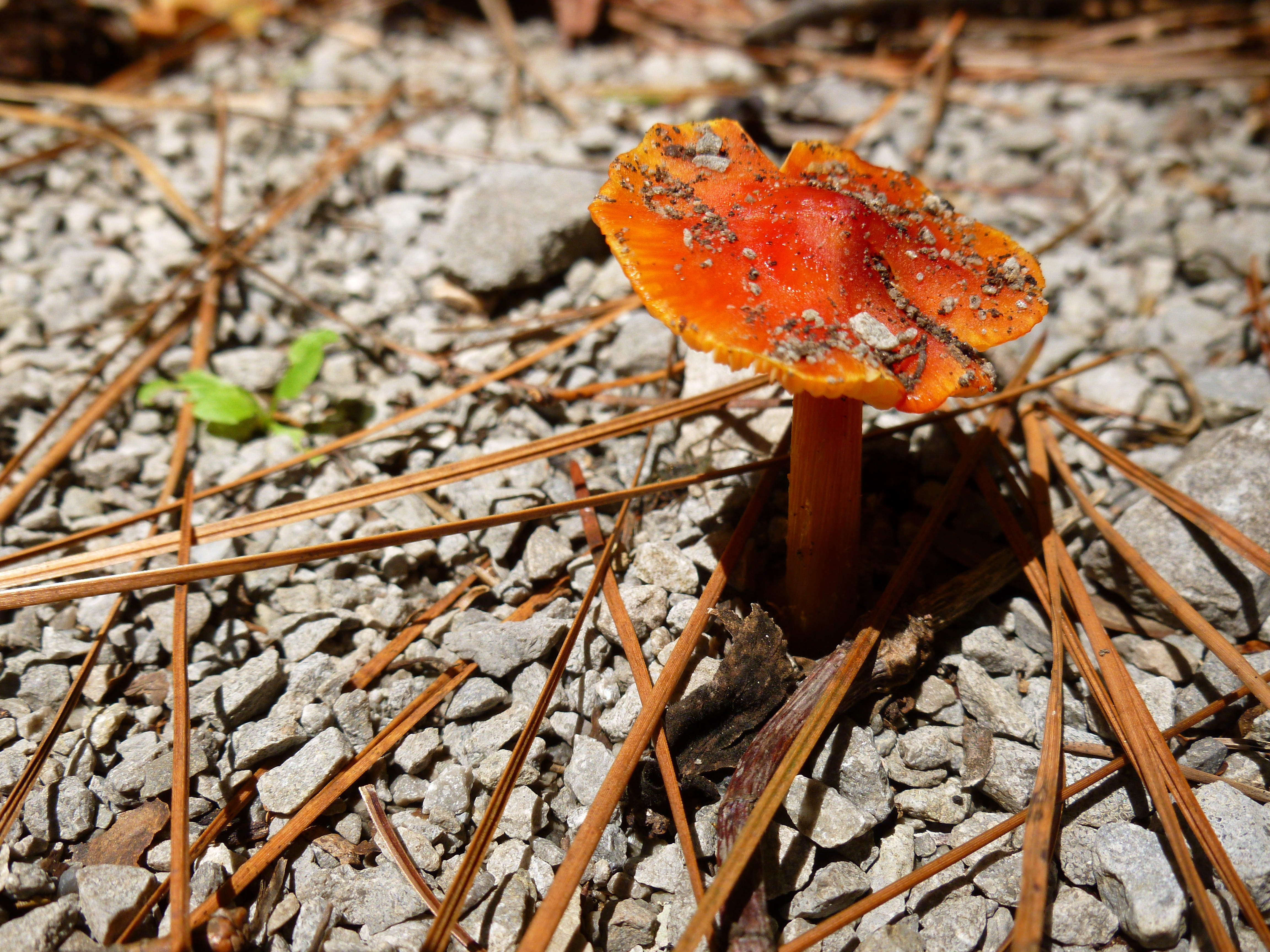